A Class F felony conviction in Wisconsin will be among the most serious events of your life. It can compromise your reputation, your career, and even your civil rights. If you’re facing a Class F felony charge in Wisconsin, don’t trust a general practice lawyer or the county DA. Get aggressive, strategic, experienced defense from Grieve Law and get your charges dropped. You are only guilty if you are convicted.™

A Class F felony is punishable by a fine of $25,000, a state prison sentence of 12 ½ years, or both imprisonment and a fine. A Class F felony in Wisconsin is similar in degree to a Class G Felony, with a slightly longer maximum prison sentence. Like all felonies, a Class F felony can never be expunged from your criminal record and may cause you to lose civil rights like voting, owning firearms, or crossing national borders.

Wisconsin has a well-organized system to classify felonies, misdemeanors, and other violations. Learn more about Wisconsin criminal penalties and defenses and what your charges really mean.

There are several types of Class F felonies which Grieve Law can defend in court, such as:

Grieve Law has defended Wisconsin residents from charges of drug possession, firearm misuse, and other felonies. We're professional, full-time defense lawyers who use every shred of evidence to fight the prosecution, unlike Fee to Plea™ lawyers who just want your case over with so they can collect their check. We have experienced defense attorneys who win cases and awards. If you’ve been accused of a Class F felony in Wisconsin, you are only guilty if you are convicted.™ Call Grieve Law today for a free consultation. 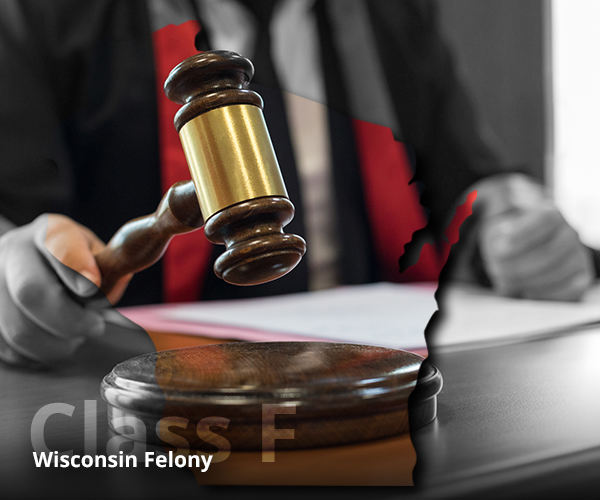 Defenses for a Class F Felony in Wisconsin

The most important thing to do when facing a felony charge is to know the system. This often means having an attorney who can coach you through your initial appearance and make sure you know all of your options. Any criminal trial is a nerve-wracking experience, but you should never assume that whatever the prosecution offers you is your only way out.

Grieve Law always creates defenses to give you the best chance of winning at court. For Class F felonies, we’ll often begin by investigating if the prosecution has probable cause to accuse you of a felony during the preliminary hearing. Without probable cause, they cannot advance your case to trial. Grieve will analyze the police and court records to determine if your rights were violated during the arrest or pre-trial booking process. If a mistake was made before trial, a motion hearing can be called to dismiss the charges. These are tactics Grieve might use with other felony and misdemeanor violations as well.

Class F felonies such as Reckless Endangerment or unsafe discharge of a firearm can be justified by circumstances, such as the defendant’s lack of knowledge about the risks of their “endangering” action or fear of a threat to one’s own or someone else’s life. Grieve Law might also argue that the danger caused by the defendant was not actually severe enough to merit endangerment charges, or that there is insufficient evidence that the defendant was responsible for endangering someone.

For Possession with Intent drug charges, Grieve Law will often begin by examining the circumstances of your arrest. If your rights were violated during the stop or search or you were compelled to give a confession, the evidence the police discovered (that is, the drugs) are inadmissible in court. It is also possible Grieve Law will find evidence of entrapment. If these investigations don’t succeed, Grieve Law knows that proving the intent to distribute the drugs is critical to charge you with a felony. Your first charge of possession of cocaine in Wisconsin without intent is a misdemeanor, and so Grieve Law may work to reduce your charge and keep you out of state prison.

You are only guilty if you are convicted™

If you or a loved one has been accused of a felony, don’t wait to seek legal advice. Grieve Law offers the highest quality, most affordable criminal law service in southeast Wisconsin. We offer flexible payment plans to make sure any Wisconsin citizen can get the legal counsel they need, and we offer free legal advice consultations to answer your questions about Wisconsin machine gun laws and outline your options. If you need a defense attorney in the Milwaukee area, nobody has a better chance of getting your charges reduced or dropped than Tom Grieve. You are only guilty if you are convicted.™

How long does a Class F felony charge stay on your record in Wisconsin?

Class F felonies cannot be expunged from your record in Wisconsin. Further, if you've been arrested for a felony but were found not guilty of committing that crime, your arrest may remain on your record for 7 years.

How to Reduce Penalties for a Class F Felony Charge

Fast and decisive action is necessary to beat a Class F felony, which is a serious charge that can leave a permanent mark on your record if you are convicted.

If you are unsure of where to start, Tom Grieve has an aggressive and strategic strategy for you and your specific needs. He is an award-winning criminal defense attorney who has the expertise to help you fight felony charges.

Tom Grieve is the leading criminal defense lawyer in Milwaukee. Other attornies wish they had our success rate. With the proper strategy and approach, you stand the best shot at getting your charge reduced or dropped.

A felony offense in Wisconsin is one that may be punished by at least one year in prison. Generally, the more serious or severe a felony is, the longer the potential prison sentence will be. Prosecutors and judges are sometimes more lenient with first-time offenders.