Concealed Weapon Charges in Wisconsin When a Firearm is Considered Concealed

Illegally carrying a concealed weapon without a permit could lead to a Class A misdemeanor according to Wisconsin gun laws, with a penalty of up to 9 months in jail, a fine not to exceed $10,000, or both.

When is your weapon concealed?

When fighting concealed firearm charges, you don't need drunk driving penalties to go with it. Grieve Law takes cases ranging from drug possession to DUI offenses to help with any charges that were paired together.

You may not have meant to conceal the weapon.

Carrying a Concealed Weapon is a class A misdemeanor in Wisconsin, punishable by up to 9 months in jail and a $10,000 fine. A conviction on this type of charge can have significant consequences on your future. 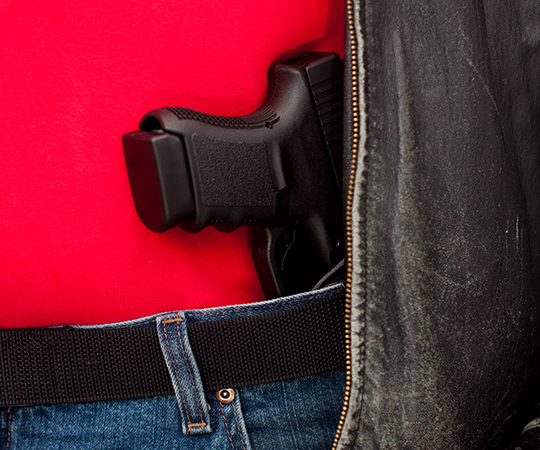 Wisconsin statute 941.23 covers who can carry a concealed weapon, what identification and permits are required, and the penalties for violating the concealed weapon laws.

Under Wisconsin law, “weapon” means not only a handgun, but also an electric weapon (such as a Taser), or a billy club. Short barreled rifles and shotguns, as well as rifles and shotguns, cannot be carried in a concealed manner. Also, the law requires a concealed carry permit to transport a loaded handgun anywhere within reach inside a vehicle. If you don’t have a CWL, a loaded handgun cannot legally be concealed and must be visible from the immediate vicinity outside the vehicle. A Grieve Law attorney can help you navigate Wisconsin short barrel rifle laws.

The gist of the laws covering concealed carry is that it is legal if you have a Wisconsin Concealed Weapons License (CWL) or a license/permit from another state that has a reciprocity agreement with Wisconsin. To get a CWL, you must be 21 or older, be able to show proof of having completed a firearms training course, and not be prohibited from possessing a firearm (as you would be if you have a felony conviction on your record.)

You Are Only Guilty If You Are Convicted ®

If you are charged with Carrying a Concealed Weapon or any other weapon charge in Waukesha, Milwaukee, or surrounding areas in Wisconsin, talk to our team of award-winning former prosecutors and experienced gun lawyers to learn your options.

In Wisconsin, how long does a Concealed Gun charge stay on your record?

In Wisconsin, carrying a concealed weapon without a permit is a charge that could remain on your record for life, even if you don't face the maximum fine of $10,000.

How to Beat Concealed Carry Charges

If you’re facing a concealed carry charge in Wisconsin, working with an experienced criminal defense lawyer that’s highly educated in Wisconsin gun law is your best option when trying to reduce or mitigate the charges you’re facing.

Tom Grieve is one of the most well-respected attorneys in Wisconsin. Grieve has been called a “Wisconsin Rising Star” by Super Lawyers and was named one of the Top 100 Trial Lawyers in America by The National Trial Lawyers. Tom also received the Client’s Choice award from Avvo, among other noteworthy legal honors and awards.

As a lifetime NRA member, hunter, 2nd amendment advocate and experienced gun attorney, Tom Grieve has the expertise to drop or reduce your concealed carry charges. No law firm in the Milwaukee area has a similar track record of dropping and reducing charges similar to yours.