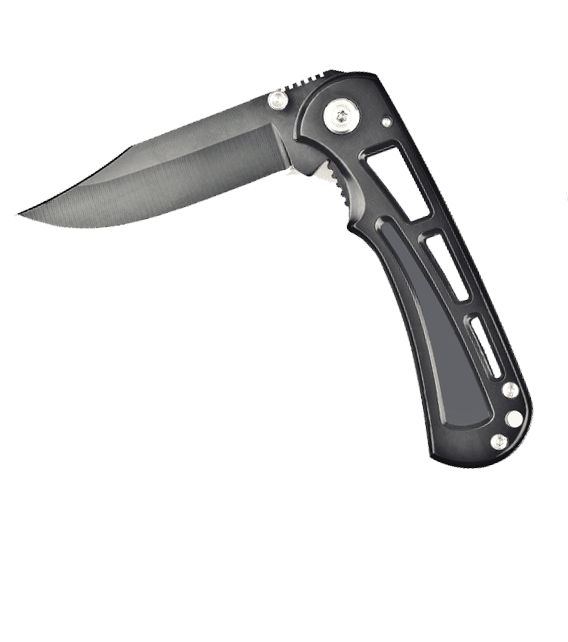 Concealed Carry Knife Laws in Wisconsin 'That's not a knife. This is a knife.'

As of September 6, 2022, there are no legal penalties for concealing and carrying a knife in Wisconsin (regardless of blade length), unless you are prohibited from possessing a firearm. It is, however, illegal to carry any knife (pocket, switchblade, kitchen, machete, etc) into any school or publicly owned building.

When Governor Scott Walker signed 2015 Assembly Bill 142 into law on February 6th 2016, a number of important changes went into effect impacting the legal status of knives in Wisconsin.

Signing AB 142 into law removed all restrictions on concealed carry of ALL knives from Wisconsin Statutes. This includes switchblades, sometimes called automatic knives.

Switchblades had been criminalized under Wisconsin Statute 941.24 and the new act repeals this statute outright. One exception is an individual prohibited by state law from possessing a firearm is still prohibited from carrying a concealed knife under certain circumstances.

The dropping of knives from the concealed carry law does not apply if you are otherwise prohibited from carrying a firearm under Wisconsin Statute 941.29, 941.231.

941.231 Carrying a concealed knife. Any person who is prohibited from possessing a firearm under s. 941.29 who goes armed with a concealed knife that is a dangerous weapon is guilty of a Class A misdemeanor.

Penalties for a Class A misdemeanor include up to 9 months in jail, fines up to $10,000, or both.

Examples of individuals prohibited from possessing a firearm include convicted felons, and anyone ordered not to possess a firearm as the subject of a restraining order or as a condition of parole. If you have questions about whether this statute applies to you, consult an experienced attorney.

Next, Wisconsin's "preemption law" has now been expanded to include knives. What does this mean? It means that counties, cities, villages, and towns can no longer pass knife ordinances that are stricter than what we see at the state level. In other words: they are "preempted" by state law.

Wisconsin Statute 66.0409(2) Local regulation of weapons. No political subdivision may enact or enforce an ordinance or adopt a resolution that regulates the sale, purchase, purchase delay, transfer, ownership, use, keeping, possession, bearing, transportation, licensing, permitting, registration, or taxation of any knife or any firearm or part of a firearm, including ammunition and reloader components, unless the ordinance or resolution is the same as or similar to, and no more stringent than, a state statute.

What About Milwaukee Knife Laws?

The knife law reform bill means Wisconsin now has a uniform knife law effective throughout the state. This will impact folks most in Milwaukee County where previously all knives with a blade length of 3 inches or more were considered weapons and resulted in weapons type charges for possession and carrying. While this was a Milwaukee County ordinance, law enforcement and prosecutors in other counties informally adopted this 3-inch standard in their own jurisdictions. However, there are no longer any knife blade length limits enforceable by law in Wisconsin.

Lastly, if someone is carrying a firearm and is charged with Disorderly Conduct per Wisconsin Statue 947.01, there are certain extra protections that are added to ensure the disorderly conduct citation cannot be strictly about the individual carrying the firearm. People carrying knives now gain the same protections. Wisconsin Statute 947.02 has been amended to read:

"Unless other facts and circumstances that indicate a criminal or malicious intent on the part of the person apply, a person is not in violation of, and may not be charged with a violation of, this section for loading a firearm, or for carrying or going armed with a firearm or a knife, without regard to whether the firearm is loaded or the firearm or the knife is concealed or openly carried."

If you have questions about the new knife laws, be sure to ask questions from someone trained and knowledgeable. Also, keep in mind that everyone’s circumstances and backgrounds are unique. The above is not legal advice, and if you have legal question, please seek the advice of qualified counsel.

In Wisconsin, how long does a Concealed Knife charge stay on your record?

Being charged for carrying a concealed knife could lead to a $10,000 fine and jail time, but the charge alone could remain on your record for life.

Do you need a concealed carry permit for a knife in Wisconsin?

As of September 6, 2021, there are no legal penalties for concealing and carrying a knife in Wisconsin (regardless of blade length), unless you are prohibited from possessing a firearm. It is, however, illegal to carry any knife (pocket, switchblade, kitchen, machete, etc) into any school or publicly owned building.

How long of a knife can you carry in Wisconsin?

You can carry any length knife in Wisconsin, unless you have been convicted of a felony.

What size pocket knife is legal to carry in Wisconsin?

You can carry any length knife in Wisconsin, unless you have been convicted of a felony.

Can you carry a Bowie knife in Wisconsin?

Yes. You can carry any length knife in Wisconsin, unless you have been convicted of a felony.

What knives are illegal to carry in Wisconsin?

No knives are illegal to carry in Wisconsin as long as you are not a felon.

What knives are legal to own in Wisconsin?

2015 Wisconsin Act 149 allows for the possession and concealed carry of switchblade, butterfly, bowie, daggers, dirks, ballistic, and hidden knives unless you have been convicted of a felony.

How old do you need to be to carry a knife in Wisconsin?

Wisconsin knife laws do not restrict the owning of a knife by a minor. However, it is illegal for a minor to own a weapon or have a weapon transferred to them by an adult. Wisconsin laws offer little clarification on when a knife becomes a weapon.