Wisconsin Castle Doctrine Explained. When can I defend my property?

The state of Wisconsin's Castle Doctrine (2011 Wis. Act 94) presumes the person standing their ground (shooting an intruder on their property) is otherwise not breaking the law themselves and believes they were in reasonable fear of imminent death or great bodily harm when someone unlawfully and forcibly entered their dwelling, motor vehicle or place of business.

The term “Castle Doctrine” was originally coined during the Battle of Lexington and Concord in 1775. The British redcoats were on a mission, pillaging and destroying Bostonian homes. Jason Russell, a nearly lame 60 year-old man got word of the troops coming his way. When they arrived, he refused to leave his home and proclaimed, “An Englishman’s house is his castle.” He was shot twice near his doorway and bayoneted 11 times, dying on his doorstep.

In Wisconsin, the law on self-defense generally states you may employ lethal force to defend yourself or another if you or they are in reasonable fear of imminent death or great bodily harm. Castle Doctrine changes the rules of retreat and when one can use force in their dwelling, workplace or motor vehicle to provide heightened protections from both criminal prosecution and civil liability if one uses defensive force. 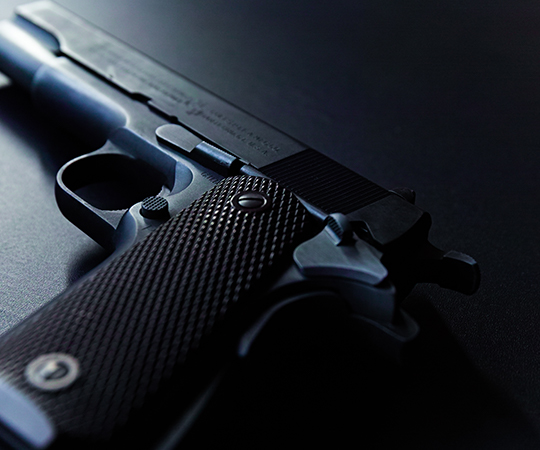 The court or jury may no longer consider whether the actor (a homeowner in his home, business owner or operator in their business or motorist in their motor vehicle) had the opportunity to flee. You may now "stand your ground" in these locations. If someone breaks in the front door of your dwelling, or is in the process of breaking in the front door, you do not need to flee out the back door; instead you may choose to stand your ground and the new law shall presume you reasonably believed lethal force was necessary to prevent imminent death or great bodily harm.

With Castle Doctrine, when someone uses force intended or likely to cause death or great bodily harm (such as shooting another person) in the course of defending themselves they have civil immunity from prosecution. This is known as "stand your ground" protection. It presumes the person is otherwise not breaking the law themselves and believes they were in reasonable fear of imminent death or great bodily harm when someone unlawfully and forcibly entered their dwelling, motor vehicle or place of business.

Translation: you no longer have to wait until that 3 A.M. bedroom intruder puts a knife at your throat before employing deadly force to stop the threat.

It is important to understand what Castle Doctrine does not do. It does not allow a person to use lethal force against an invited dinner guest who remarks that your wife's meatloaf is overdone, or that your beer is too warm. Hopefully, that went without saying, and if it came as a surprise then I strongly urge you to contact one of our Milwaukee firearm attorneys sooner rather than later.

Is Wisconsin a stand your ground state?

Can you shoot someone on your property in Wisconsin?

Is Wisconsin a castle doctrine state?

Wisconsin is a Castle Doctrine state. This means that if you are in your home, car, or business there is a legal presumption deadly force can be used against a person if they have broken into, or are in the process of breaking into, one of these locations while you are present inside.

Can you shoot someone on your property in Wisconsin?

You cannot use deadly force to stop a mere trespass to property, such as your yard, in Wisconsin. Walking onto your lawn or legally entering your home do not trigger the Castle Doctrine. As a result, absent a normal self-defense claim supported by strong evidence, you can't use deadly force against a trespasser.

In Wisconsin can you shoot an intruder?

Wisconsin law allows the use of deadly force if you can fully claim the Castle Doctrine applies. This may involve that the intruder broke into your home, car, or business while you were present inside. Without Castle Doctrine, an individual would need to assert the normal affirmative defense of self-defense if they use deadly force against a person.

If you ask someone to leave your property and they refuse can you shoot them?

Castle doctrine would not apply here, so we use normal self-defense laws, even if they start in your home assuming they did not break-in. This means you can only use deadly force if you reasonably believe they are an imminent threat to either kill or cause great bodily harm to either yourself or another.

While this may seem cut-and-dry to some, there can be a considerable amount of ambiguity involved when it comes to law enforcement and the court system. If you have specific questions about gun laws, our Milwaukee gun lawyers suggest you speak with one of our highly experienced Wisconsin firearm attorneys who are experienced in Wisconsin firearm laws. We also encourage you to enroll in a Wisconsin firearm training course, such as one offered by the American Association of Certified Firearm Instructors (AACFI.com), so you are comfortable, confident and safe when handling a gun.

Remember, it is far less expensive to take a Wisconsin firearm class and talk to an experienced Milwaukee firearm attorney rather than be charged with multiple felonies from an incident that was mishandled. Take the time to protect yourself and your family with more than just a box of ammunition -- protect them with knowledge of both the law and of firearms.

DISCLAIMER: This article is NOT intended to be legal advice. You need to consult with a highly qualified Wisconsin firearm attorney who can make specific recommendations befitting of your circumstance.

Grieve Law takes cases in all areas of criminal law, including OWI offenses, firearm and drug possession. DUI penalties can be combined with firearm or drug penalties creating higher consequences. You need an experienced attorney on your side to win your case.

In Wisconsin, how long "stand your ground" stay on your record?

There are many charges that might follow using your firearm for self defense. Castle doctrine as a defense does not work 100% of the time. If it's proven successful, you might not have any charges on your record.

If you’re facing gun charges after exercising your Castle Doctrine rights, the smart thing to do is lawyer up fast. While Wisconsin Castle Doctrine law is firm in its protection of those who use deadly force to protect themselves and others, it can be ambiguous in its interpretations. If you’re being criminally charged after using deadly force to defend yourself or your family, you need a lawyer well-versed in gun law to fight for your rights.

Tom Grieve has experience in gun law and defending the 2nd amendment rights of gun owners. As a gun owner and hunter himself, Attorney Grieve is well-versed in the intricacies of Wisconsin gun laws, allowing him to passionately advocate on your behalf.

You can find other law firms that will take your case, but you won’t be able to find an attorney with as much knowledge of Wisconsin gun laws and skills in advocating for 2nd amendment rights as Tom Grieve. Your choice of attorney can mean the difference between walking free and spending time behind bars. Stand up for your 2nd amendment rights and contact Grieve Law today.