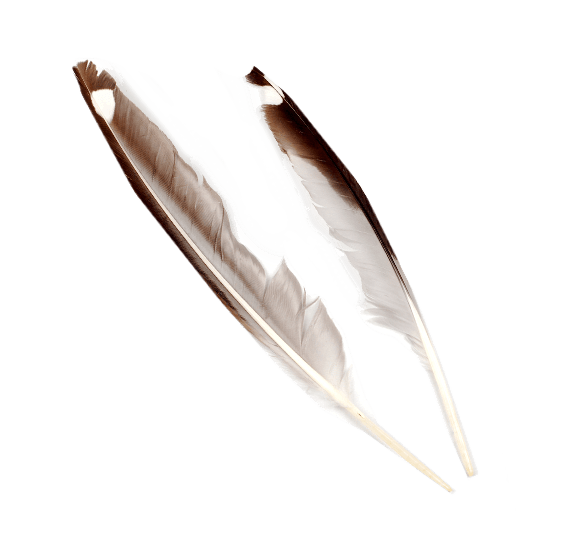 Unintentional possession or killing of an endangered animal in Wisconsin could lead to a fine ranging $500 to $2,000 and one year revocation of a hunting license, while intentional violation of Endangered and Threatened Species Laws could result in a $2,000-$5,000 fine and three year hunting license revocation.

Is it Illegal to Pick up Bird Feathers in Wisconsin?

Yes. Many Wisconsin residents do not realize collecting feathers, nests or eggs which have fallen out of trees is illegal. The Migratory Bird Treaty Act and the Eagle Protection Act make it illegal to possess feathers from more than 800 species of birds. These federal laws prohibit the possession, use, transport, barter, import, export and sale of any bald eagle, golden eagle and other protected native species, alive or dead, including feathers, nests, eggs or any part of the bird.

Picking up fallen feathers is illegal because it is hard for law enforcement to determine how you became in possession of eagle feathers and whether harm was caused to the animal, its nest or eggs. Our experienced lawyers will create a strategic defense to prove your possession was unintentional to get your charges reduced or dropped.

Not all feathers are illegal to possess, invasive species and non-migratory birds, like House Sparrows and turkeys are not protected under federal law making it perfectly legal to pick these feathers off the ground.

You Are Only Guilty If You Are Convicted®

A first offense violation of the Bald and Gold Eagle Act can result in a fine of $100,000, one year imprisonment or both.  A second violation is considered a felony and penalties significantly increase.

Violating any part of the Migratory Bird Treaty Act is considered a misdemeanor and is penalized with a fine up to $15,000, imprisonment up to six months or both. To knowingly or intentionally take a bird or its parts has a maximum fine up to $2,000, one-year imprisonment, or both. If you are unsure which felony/misdemeanor class your charges fall under, learn more about Class U misdemeanors in WI.

Possession of Owl Feathers in Wisconsin

All owls are protected under the Migratory Bird Treaty Act making it illegal to capture, kill or have possession of owls or owl feathers in Wisconsin without a special permit. Owls, hawks, and eagles all fall under threatened raptors or birds of prey. In the state of Wisconsin, it is illegal to have possession of raptor feathers.

The state of Wisconsin recognizes the difference between an intentional and unintentional possession violation. Our experienced and knowledgeable Wisconsin attorneys will use the specifics of your unique case to prove your possession of an eagle feather or other protected plant and animal part was unintentional- significantly reducing your charges.

The unintentional possession of an endangered or threatened animal or its parts, such as feathers can result in a $500-$2,000 fine and revoked hunting privileges for one year. Intentionally violating the animals on the endangered and threatened species list will leave you with $2,000- $5,000 fine and/or up to 9 months imprisonment.

Endangered or threatened animals include, but are not limited to:

A possession of endangered plants charge if unintentional can be up to a $1,000 fine and intentionally possessing, taking or selling these plants can land you in jail for up to 9 months and/or a $1,000 fine.

Endangered or threatened plants include, but are not limited to:

Exceptions to the Law: Endangered or Threatened Species Permits

While no one is exempt from federal laws, the Department of Natural Resources (DNR) does issue permits under specific conditions. The ability to take, transport possess or export the animals or plants on the Wisconsin Endangered and Threatened Species List is allowed for certain educational, zoological, scientific or preservation purposes.

The Federal Eagle Aviary and Eagle Aviary Permit allows Native Americans to possess bald or golden eagle feathers and parts for religious purposes if obtained lawfully. There are even permits for maintaining eagles with minimal human contact. Strict guidelines must be followed for caging and caring for eagles, in addition, to accurately kept records to ensure humane and healthful conditions.

Our Wisconsin criminal defense attorney capabilities cover a wide range of charges, including possession of bald eagle feathers and other violations protected under the DNR endangered and threatened species list. Don't navigate the confusing legal system alone we'll advise you on the best options towards getting your violations or charges reduced or dropped. Learn more about the sentencing guidelines in Wisconsin if found guilty.

In Wisconsin, how long does a protected species charge stay on your record?

Not only would you get a fine of $500 to $2,000 if convicted of possessing or killing a protected species, but that conviction would be on your record for life.